Poetry and other forms of story telling are the nonviolent weapons of the oppressed. It is a way of expressing solidarity, pain, joy and cultural identity in order to keep a nation alive. The Palestinian people are under siege on all fronts; our poetry and stories are our lifelines, ensuring that generations never forget who we are, where we come from and why we must continue to struggle for the right to exist. END_OF_DOCUMENT_TOKEN_TO_BE_REPLACED

Prior to Anna’s visit to the occupied territories of Palestine, Christian Avard of Vermont’s Deerfield Valley News and iBrattleboro.com conducted the following interview with her.  Republished with permission.

END_OF_DOCUMENT_TOKEN_TO_BE_REPLACED

Challenging Israel’s long list of myths, John Quigley perceptively entitled his 1990 book, “Palestine and
Israel: A Challenge to Justice”. Such title is more appropriate today than ever to describe Israel’s
continuous and flagrant violation of International law and all UN resolutions asserting that the West
Bank is an occupied territory. During WWII, occupied France was just that, occupied, despite all
attempts of the German occupying army to present otherwise. The West Bank is an occupied territory.

END_OF_DOCUMENT_TOKEN_TO_BE_REPLACED

In writing this article I have graciously used Norman Finkelstein’s book Beyond Chutzpah as a helpful aid.

The comments that follow will address the recent condemnation of Israeli Apartheid Week at Queen’s Park. The campaign initially had been proposed by MPP for Thornhill Peter Shurman and then unanimously approved by 30 MPPs that were present on 25 February 2010. Having carefully reviewed the transcript of the debate in Ontario’s Legislative Assembly, some comments are in order to demystify the ill considered falsification and distortion that ensued. I should note that while this letter is addressed as a response to Mr Shurman’s bill, my comments will by no means be limited to the indignation expressed by Mr. Shurman. To be fair, the hysterical condemnation of Israeli Apartheid Week evoked outbursts of rage by numerous MPPs and therefore I will not spare them any silence in their deceitful display of condemnation of Israeli Apartheid Week.

END_OF_DOCUMENT_TOKEN_TO_BE_REPLACED

This is an edited version of a speech delivered by Students for Palestinian Rights member Rowland Robinson at the rally by SFPR and Laurier 4 Palestine against Israeli Apartheid on March 1st, 2010.

Rowland is in his 4B Honours Anthropology and Sociology term at the University of Waterloo. Much of his academic work has been on colonialism, post-colonialism and indigenous issues. 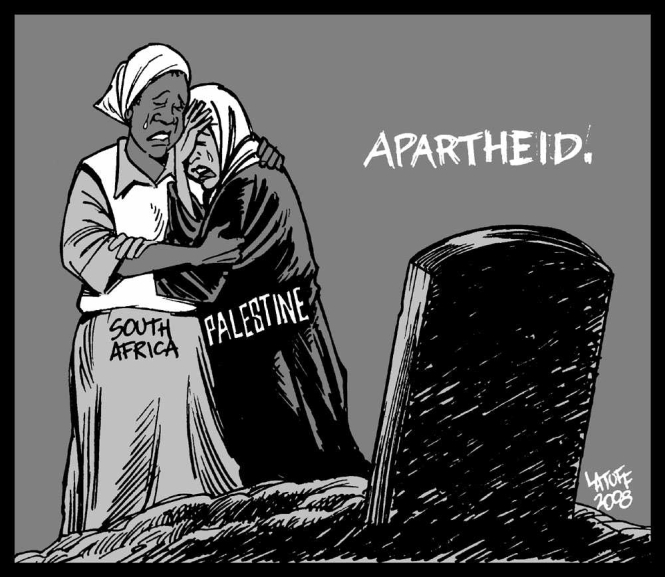 END_OF_DOCUMENT_TOKEN_TO_BE_REPLACED

Last Monday February 22nd, an act of vandalism occurred that reflected the intolerance and moral cowardice of two certain students on this campus. As some readers may have already noted from a campus-wide advertising campaign, the Students For Palestinian Rights (SFPR) have been busy organizing Israeli Apartheid Week, an event beginning on the 1st of March that aims to raise awareness about the Occupied Territories and the oppression endured by the Palestinian people residing there.

Among the diligent efforts of three SFPR members was a large banner still visibly torn in the SLC as I write this article. That day, SFPR members hung the poster for a mere half hour before returning, only to discover that it was gone. A nearby student then approached the activists and pointed out that the tattered poster had been unceremoniously stuffed into a garbage bin. The act of vandalism was not only witnessed in person, but it also occurred in broad daylight at approximately 11:20AM. One of the suspects was described as a Caucasian of tall build with light brown hair, and his partner-in-crime was an individual of Middle Eastern descent. The campus police have been notified of this act and there is currently an investigation pending.

While some may question why the reporting and apprehension of these people is necessary or even important, the answer is that our Western society prospers by encouraging open forums of discussion in which various views can be expressed freely without fear of reprisal. Democracy and free speech are thus important elements of this process and are critical to the upholding our rights, collectively and individually, whatever they are advocating. Any repression of such rights, whether it be by vandalism, censorship, or intimidation of others who we may or may not agree with is not only despicable, it is also an attack on your rights. As one of the Founding Fathers of America, Thomas Paine pointed out, it is not only the right of the speaker to speak and be heard, it is also the right of the audience to listen. Fellow students, whether you agree with the goals of the SFPR or not, there is no question that the act of vandalism witnessed last Monday was a crime of censorship against you.

Just as the heckler drowns out the speaker’s voice so that the audience cannot understand the orator, so have these two uncivilized cowards decided to deny you the right to information. It is for precisely this reason that I argue that one should be intolerant of intolerance while upholding free speech. The politically-correct willingness to protect those who wish to impinge on the rights of others is nothing more than the willingness to be pushed around by the thugs of society. That two people attending an academic institution that uphold such values, apparently unwilling to discuss their views in a civilized and democratic manner, would commit such a crime is a demonstration of the fact that they are simply not welcome here. Fellow students, stand up for your rights.

President Ahmadinejad of Iran has been roundly condemned for comments made at the United Nations anti-racism forum. In describing the establishment of the Israeli nation, he said it was done “to make an entire nation homeless under the pretext of Jewish suffering.” He further said that doing so brought “to power the most cruel and repressive racist regime in Palestine.”

It is unfortunate that the Iranian president cannot separate fact from inflammatory fiction. History proves that there is no ‘pretext’ of Jewish suffering. The nation of Israel as we know it today was established following one of the cruelest, most barbaric periods of genocide in recorded history. The murderous German regime, under the savage leadership of Adolph Hitler, defined genocide in the twentieth century, in a period known as the Holocaust. The people of the Jewish nation are right to ‘never forget’.

END_OF_DOCUMENT_TOKEN_TO_BE_REPLACED

US President Barak Obama and special envoy to the Middle East, George Mitchell, are positively perplexed. This Middle East peacemaker gig really is more challenging than they anticipated. What a complex, thorny issue they have found themselves in. “Expectations were too high”, “We overestimated our ability”, President Obama stated in an interview with Time magazine. Obama explains that “divisions within their societies” made “meaningful conversation…very hard”. Perhaps these “divisions” that seem irreconcilable to the point of negating meaningful dialog point to why this conflict simply won’t resolve itself. Thousands of years of fighting in this Holy Land make a thousand more seem inevitable. Obama seems reclined to make this conclusion and wash his hands of failure.

END_OF_DOCUMENT_TOKEN_TO_BE_REPLACED

General Dynamics. Shell. Apache Corporation. Philip Morris. Pfizer. These are weapons manufacturers, oil companies, mining corporations, tobacco companies and pharmaceutical giants. Notorious war profiteers, environmental destroyers and human rights violators. Morally and ethically, these are not the types of firms with which one would expect Carleton University to have any sort of affiliation.

END_OF_DOCUMENT_TOKEN_TO_BE_REPLACED

by Robert FantinaOnce upon a time at a school district far away there was a student named Jake. Jake was an orphan who bounced from one foster home to another, and was constantly being picked on. This started in kindergarten; he had a few friends, but most of the other kids ignored him, and a couple of the bigger kids would often steal his lunch, push him to the ground and taunt and insult him.